The Myth of the Burn!

"Wow! That was an EPIC practice! Judging by my sweat soaked shirt, we must have burned like a million calories!! Lets look on Ichange.com and see how many calories we burned! Ok I will enter in 2 hours of aerobic exercise. Wow look at that, it says we burned 2500 calories! We are so awesome! We TOTALLY deserve some pizza and beer now because clearly we burned at least that much during our practice!"

We all do this, either weekly or at least every once in a while. We assume that 1) the internet knows everything 2) a sweaty shirt = massive calorie burn. As a result, we decide to reward our awesome athletic workout with a bunch of trash that does nothing good for an athlete's body. Two things to watch out for as you work on building your endurance, getting lean, and increasing strength:

1. You do not burn as many calories as you think you do.
2. Crap food as a reward for a job well done.

Ok, lets talk calories out vs calories in. We do not BURN a cheese burger on the track. Our body burns carbs, fats, and proteins at different rates and I promise you, you did NOT burn enough fat during your workout to make that cheese burger and fries at the bar justifiable. Be conscious of using online calorie burning trackers. While we at Derbalife do recommend you track your calorie/food intake as part of maintaining a healthy lifestyle and nutrition program (get me as your FREE online coach and log your food by using this link www.ichange.com/user/krissykrash to track food and progress, mobile site is available to!), we want to caution you that online calorie burning programs are NOT accurate. Calories burned varies based on height, weight, exertion, rest times, # of jams skated, BMI, body fat percentage, and amount of lean body mass you carry.

Did you REALLY earn THAT?!?!? We all do it. Practice is over, you head home or to the bar and you convince yourself that you totally earned that burrito, pitcher of beer, pint of ice cream, ____insert crap food here___.

But here is the deal. You are an athlete. Your body is getting beat to crap and dumping junk in after practice doesn't help your recovery time, nor does it make those lift and separates look any better in that next bout photo. So that being said, food is awesome and yummy and yes we do deserve a treat for a job well done but keep it in check. Life and health are about balance. Find things you love but that wont do too much damage if you have them from time to time. Skinny Cow is my go to treat if I want to indulge. Most times though, after practice I will mix up a Formula 1 shake with added protein, or I will have a Rebuild Strength shake because it satisfies my sweet tooth and helps my body to recover faster or if I want salty I will roll up spinach inside of Turkey Deli slices for a perfect recovery treat. YUM!

If I do end up out with my team, I order a salad with chicken if they have it or if all else fails a few protein packed chicken wings and celery are waaaay better than high fat high carb pizza or nachos. 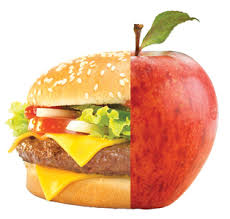 What is all boils down to is that you are an athlete. You practice hard, you focus, and you want to stay strong and injury free. A key piece of that is keeping your self nourished. Making sure you hit your Recommended Daily Allowance of vitamins and minerals to keep your body healthy on a cellular level, getting the right balance of carbs/protein/fat, watching those calories. If you take care of your body and treat it well, you will have an amazing successful, ass kicking life in roller derby for many years to come!


Want me as your FREE online coach with a great food log/progress tracker program? www.ichange.com/user/krissykrash to track food and progress - mobile site is available to!

Register for free, connect with me for a free nutrition profile, and join the All Derby Drills group on ichange to connect with other skaters around the world!

This is Krissy Krash, signing off! You can always hit me up with questions, for advice, to give feed back, or for a free nutrition and performance profile at krissykrash.derbalife@gmail.com


Ready to get your ass in gear? Get 10% off www.goherbalife.com/krissykrash by using the coupon code  AllDerbyDrills

Email ThisBlogThis!Share to TwitterShare to FacebookShare to Pinterest
Labels: Nutrition, OFF skates

Pants Off Dance Off On Skates Work-Out

The following drill is a guest post by Smarty Pants of the Texas Rollergirls; she is the creator of this drill.

Alternative names: Pants Off Dance Off

Objective: Getting a great workout while having fun; improving your blocking skills
Typical length of drill: 30-60 minutes
Materials needed:

Skill level required: None
Description: I like to lead on-skates workouts that encourage skaters to sweat and exercise while having a good time and challenging their skater skills.

60 minute Pants Off Dance Off

Start with dancing for a 10-minute warm-up- pretend you are attempting to impersonate the ladies in music videos- you know the ones in short shorts and bras… I recommend the music mix start mild and build up over a 10-minute period.

Follow this warm-up with a 5-minute dynamic stretch and quick water.

Throw in another 5-minute dynamic stretch and quick water.

For the next 15 minutes you will spend 60 seconds blocking on your knees (see description below), 60 seconds dancing, and 60 seconds sprinting.

Throw in another 5-minute dynamic stretch and grab more water.

Finish your workout with 10-minute body circuits, 45 seconds on, 15 seconds off of the following:

Quick 30 Pants Off Dance Off

Posted by Estrogeena Davis at 10:42 PM No comments:

Alternative names: I bet this drill has got a real name too, I learned it from SumMo Payne when I joined the Kornstalkers practice so I named it after her.
Objective: To learn how to skate forward, to the sides, backwards by moving your feet quickly without turning around
Typical length of drill: 15 mins
Materials needed: 4-8 cones (or more if you have a lot of skaters)
Skill level required: Basic skills (skaters need to be cleared for contact to participate in step 2)
Description: Four cones are set up in a square formation, as shown in the illustration that follows.  Depending on how many skaters you have, you may want to put two or more sets of cones around the track/ floor so that as many skaters as possible can practice at the same time.  The distance between the cones does not have to be too big, the idea is to keep on moving your feet all the time, not to Sunday skate.

There are two steps in this drill:

Step 1
For one minute each skater moves around the set of four cones at a rapid pace.  The purpose is to keep your eyes in one direction, to not look at your feet, and to always go through the middle in order to maximize the agility practice (as shown through the blue line in the illustration).  Skaters are to use their hips to move around but should always keep their torsos and eyes facing forward.  Skaters should use their feet while moving around the cones in a random order (back to front to left to front to right to left to back to front etc.).  They should make sure that they pass the cones from all sides and not always from the same side, and to switch direction and choose randomly which cone they are about to pass next.


Step 2
Another skater stands in the middle of the four cones, in a proper derby stance.  As the first skater is moving around the cones s/he gives a hit to the person standing in the middle every time s/he passes her/him.  Skaters should make sure not to hit this person while skating backwards (that's a direction of gameplay penalty).  Also, skaters should do their best with the hits in a tight space.  Try to make the person in the middle fall.  If there are many new skaters doing the drill, the hits don’t have to be that hard.  Switch the person standing and the person skating around the cones every 1 minute.

Additional notes: The drill probably has got an official name. I didn’t catch it while skating with the Kornstalkers in August, 2011.

SumMo Payne is a derby skater and a derby coach. She skates for Sioux City Roller Dames and coaches the Merby -team Kornstalkers.
Posted by Tigre at 5:40 PM 2 comments: