Alternative names: --
Objective: Stopping on command in small spaces; pacing
Typical length of drill: 10 mins
Materials needed: Varies -- I use a track that is permanently laid down and create "boxes" between 10 ft -markers, but you can also choose to create boxes elsewhere in your space, and depending on your skaters' skill level they can be either large or small boxes.  At the very least you will need either chalk, masking tape, or cones to mark out the boxes that you will want your skaters to stop in.
Skill level required: Safe stopping and falling skills

Description: For the original version of Musical Stops you will need a laid out track with the 10 ft -markers included.  Use chalk, cones, or masking tape to mark out the boxes.  What I'm referring to here are small areas in which your skaters will be required to stop.  For my freshmeat, I mark out five 10 ft -boxes as in the illustration to the right.

Now comes the fun part: While you play music, the skaters skate around the track in a counter-clockwise direction.  Each time you abruptly stop the music, the skaters come to a complete stop within one of the boxes on the track.  The last person to come to a stop within each of the five boxes is out of the game (this is on the honor system, people).  If a skater is all by herself in a box, s/he can remain in the game.  The game is over when you decide--I usually end it when it's clear that the five people left on the track have set a pace that allows each of them to get to a box by themselves when the music ends, but, what you can do alternatively is reduce the number of boxes once you get down to the same number of skaters as there are boxes, and from here go with the traditional musical chairs -route: The last person standing wins.  Depending on the skill level of your skaters this can be a fun way to end it.

If you have really skilled skaters, this game can be adapted and made more challenging: 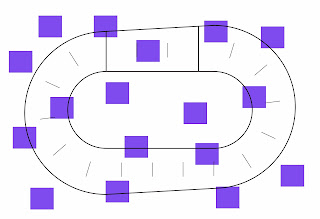 Additional notes: This is a really fun drill that I came up with while training the freshmeat in Boston.  I really like to always end every practice with a game that uses the skills we've practiced over the course of the three hours, because games (and especially competitive ones) gets the skaters to think about the object of the GAME and not about their feet.  This one is good for pacing and stopping in short distances.
Posted by Estrogeena Davis at 4:30 PM 1 comment:

The Director and Her Extras

Alternative names: --
Objective: To practice being a leader and a follower on the track, to practice physical and verbal communication, to improve team-blocking skills
Typical length of drill: 15-20 mins
Materials needed: A full taped-down track
Skill level required: Skaters must be cleared for contact

Description: Create three lines of skaters at turn four. The first line will be for the Director, the second line for the Extra, and the third line for the Enemy. Skaters should make sure to rotate through the lines during this drill so that they get to work on being BOTH the Director and the Extra.  On the whistle the first skater in each line will skate out (you can also choose to have the Enemy come in one second later than the Director and the Extra).  The Enemy's job is to play stupid and permit the Director and the Extra to do their job over the course of one lap.  In this drill the Director will use the Extra to positionally and physically block the Enemy. S/he will be pulling, pushing, grabbing, and directing the Extra.  The Extra's job is to be a rag doll, to let herself/himself be moved around.  For her/him this is an exercise in being flexible on the track.  I mean, how many times have you tried pushing a teammate into the opposing jammer and found that your teammate is so committed to her current position that she is an immovable piece?  This will teach the Extra how to be steady on her skates while still being jelly-like enough for her teammates to use her/him and move her/him around.  The Director should use the time wisely, be active the entire time, and not just save up for one good hit.  S/he should be constantly hitting or positionally blocking the Enemy.  The drill ends once the group of three skaters have completed one lap.  As you progress through this drill and get better and better at it, allow the jammers to use more and more force and brains to get out of the situation.  This drill should challenge the Director and the Extra, but not be so impossible that they aren't getting any practice out of it.

A lot of people wonder about multi-player block penalty possibilities when they hear about this drill and the Two-Point Touch.  I would like to address that by saying that Practice Makes Perfect.  You can avoid MPB penalties by practicing this over and over and over again.  Your body will learn how to use your hands without incurring MPB penalties.  It's the same with most other drills -- there will always be a chance for penalties, and some drills / moves / strategies are more prone to one kind of penalty over another, but the more your practice, the more you can work on executing your plans within the boundaries of the rules.
Posted by Estrogeena Davis at 12:47 PM No comments: